Who Should Get The Next B1G Hockey Invite? 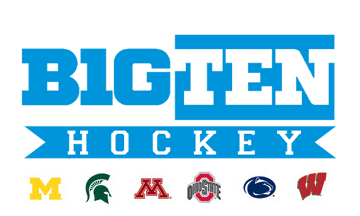 Ah, the smell of college hockey is in the air. As the last season before Big Ten Hockey broaches itself on the NCAA landscape gets underway, rumors of course swirl around who could be next to join Big Ten Hockey status.

Truth is, it's difficult to make the leap to that next level. With Title IX to be considered and the most important aspect being the funds needed to make a Div.I caliber team, not everyone can make the seemingly easy transition that Penn State did — though we here at Big Ten Hockey wish they all could.

Still, let's look at some of the reasons each Big Ten school could, given the right funding and support, open the gates for hockey.

A program that I became familiar with during my time at Iowa State, Illinois is an obvious choice. The state itself is a hotbed for hockey. To begin, you have the 2010 Stanley Cup Championship Chicago Blackhawks, the American Hockey League's Chicago Wolves, a great feeder team for the NHL's Vancouver Canucks and kids in Illinois rival neighboring Minnesota with the passion they have for the game beginning at the Peewee levels. The only thing missing it seems is college hockey.

The Fighting Illini have seen success on the ice in the American Collegiate Hockey Association (ACHA) DI club level, winning the national championship in 2008 (with not a loss all season to blemish their record) and in 2005 — defeating then ACHA Penn State. They were also crowned runners-up in 2009 and 2002 — losing to Penn State in '02.

Anyone visiting the Illinois Ice Arena, or the "Big Pond," knows the atmosphere is intense, similar to what can be seen at NCAA DI hockey stage. Fans hover over the opposing players bench and the rink itself is built to be Olympic size, making it an even tougher challenge for visiting teams.

It would be a great move for this program. Recruits would be plenty in the state and I imagine would most definitely draw interested parties from outside its borders.

More on the current team and club program is offered here in the school's student newspaper. 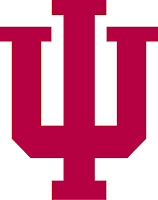 While Indiana may not possess some of the obvious benefits that Illinois did, they still have something to bring to the Big Ten Hockey table.

Typically known as a basketball state, the Hoosiers made the move from Div. II ACHA club level to DI in 2008. Another opponent for the Cyclones, I was able to see some strengths in the fairly new team. Though not a lot of depth, Indiana was able to hold their own at the ACHA DI level in one of the arguably tougher conferences, the Central States Collegiate Hockey League.

From the sounds of it, Indiana continues to see their club program grow in interest. Crowds will be a tough sell, with the Hoosier basketball team dominating the fanbase which could also potentially make recruitment hard as hockey is not the main choice in winter sports for youth.

They probably aren't even considering the option in Bloomington just yet, but should they talk about it I can see Indiana being one of the last teams to join the Big Ten. Still would be great to have them.

Another newcomer on the ACHA DI scene, putting all rivalries aside, the Hawkeyes also have some potential. There were meek beginnings for the club team at first, barely able to field more than two lines and desperate for players. I'm told both the team, and program, have grown since then.

As much of a surprise as it may be to some, Iowa actually has its fair share of hockey pockets, too. Home to numerous junior hockey teams including Iowa City's neighboring Cedar Rapids where the United States Hockey League's Roughriders reign, Iowa has more than just farmland.

Football is king on the Iowa City campus as is wrestling, but with such a short season, how great would it be to add hockey into the winter mix. I know first hand (as a Gopher and Cyclone) how passionate those Hawkeye fans can be and I can see hockey bringing out the crowd even louder.

A newcomer to the Big Ten league and a powerhouse in football, volleyball and at times baseball and basketball, the idea of introducing hockey into the mix is exciting on a variety of levels.

We talked about Cornhusker hockey a year ago and Corn Nation entertained the idea recently, planting the seed in people's minds once again.

Nebraska, like the others could pull this off. Omaha has seen great success in the Div. I rankings with the University of Nebraska-Omaha Mavericks holding their own not only in the competition, but in the market as well.

Just getting things on ice rolling with an ACHA Div.III hockey team, time will tell how successful a DI program could be in Lincoln. The USHL has given a home to the Stars which has seen varied success of its own, but it still begs the question of how great a market could be in Nebraska.

Another Chicago based school, I echo many of the same sentiments for Northwestern as I did with Illinois only with slightly less aggressiveness.

Northwestern is currently playing ACHA Div. III club hockey and with the ability to draw on local hockey players still interested in playing hockey has been able to maintain a roster of some depth.

Big Ten anchor Rick Pizzo tweeted to B1G Ice Hockey Thursday that a Northwestern journalism student had recently contacted him in regards to the school making the hockey move up. Here is what Pizzo had to say in his tweets to us: 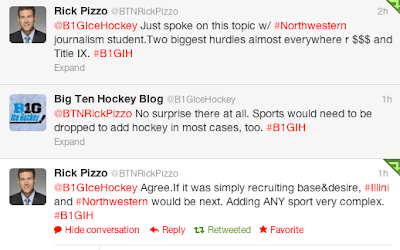 A B1G shout-out to Pizzo for keeping the topic going, and Wildcats it looks like you have someone backing you guys for the move up.

Purdue, similar to its state counterpart Indiana, has made little effort to jump on the ice.

Purdue is another one quietly making ripples in the ACHA. There's a passion on the ice, but not quite a enough. For that reason, I foresee them being the last to join Big Ten Hockey, if ever. Again, not that it wouldn't be great to have them join!